Pine Rivers club members in the news in 2013

Members showcase the various dog sports available through participation in the club.

To find out more about the sport of flyball check out our flyball page. 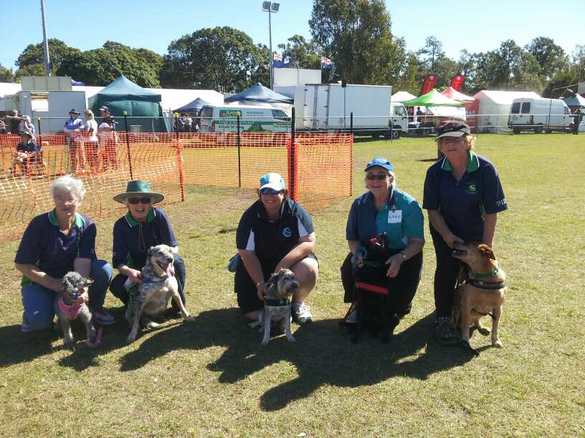 The Pine Rivers Devils team which gained a second place. Virginia and Mitzy, Rosemary and Penny, Nikki and Boofhead, Ros and Jeddah, Gail and Manny.
Tracking Championship
Congratulations go to Kath Quinn and her German Shorthaired Pointer, Coco, on gaining their Tracking Champion title at Harlin on 22nd June, 2013.
To achieve a Tracking Championship title, after a time delay of at least an hour and a half the dog must follow the scent of an unknown person for approximately 1200 metres. The dog must negotiate at least 6 changes of direction of the track, find and indicate two out of three 'lost' pieces of clothing belonging to the tracklayer, ignore two deliberately laid
decoy tracks by another unknown person and find the tracklayer at the end of the track.  Great work Kath and Coco.

Kath and Coco working a training track on the way to their Tracking Champion title.